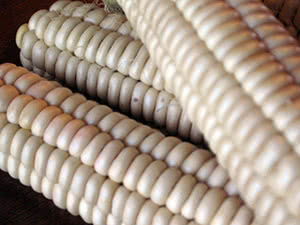 The Story Behind White Iroquois Corn

Harvest Market is proud to use fresh, local ingredients in our bakery…including our cornmeal! White Iroquois Corn is an heirloom crop grown and harvested at the oldest family farm in Livingston, Illinois. The Spence family really enjoys the whole process of growing, harvesting and milling. It is a wonderful connection between farm and food. You can really taste the difference. Here’s the full story of the Iroquois White Corn, directly from our suppliers at Spence Farms:

“Iroquois White Corn was initially grown by the Iroquois Tribe in New York state. The Iroquois Nation was supplying this corn meal to restaurants, including some that we work with in Chicago. In 2007, Rick Bayless’ Frontera Grill restaurant in Chicago asked us if we could grow this corn as they were unable to obtain the corn meal anymore from the tribe.

We called all over the United States hunting for seed to no avail. Marty spent days on the internet contacting companies and even talking to researchers of corn at major universities. He found the corn was listed on the Slow Food Ark of Taste, which lists the best tasting heirloom foods. We expected to be able to find seed at a number of places because of this listing. But, he couldn’t find it in the United States. Eventually seed was found with a company in Canada and we ordered one and a half pounds at $50 per pound…expensive seed. We grew eight rows of corn in 2007.

From eight rows we were able to save nine pounds of the very best seed for planting the next year. We roasted the rest over an oak flame and milled 63 pounds. The Managing Chef at Frontera, Brian Enyart, was amazed that we were able to grow it for them, not expecting it for another few years.

In 2008 we applied for and received a grant from the Frontera Farmer Foundation that would help us purchase more seed and the equipment we would need to grow and produce this rare corn and corn meal. The Frontera Farmer Foundation is a not-for-profit organization supplying grants to small farmers to assist them in ventures that will make their farms more profitable and more sustainable.

When we called the company in Canada to purchase another six pounds of seed, we were informed that they only had five pounds that they could sell us. And, we were unable to find it anywhere else. It had become, in one year, even more rare and valuable. Now we were on a mission to save this corn from extinction.

We purchased the five pounds and planted all that we had, keeping only one pound for emergency back up. Just over an acre was grown. We had a few trials with equipment malfunctions, wind and hail pushing the corn over, and not enough hands to harvest. But, we grew the one acre of corn and had it harvested by the middle of November. The corn was hand shucked, roasted over oak flame, shelled with an old hand crank sheller, and milled with our new commercial grain mill. Despite the setbacks and a poorly pollinated crop, we were able to produce over 1,000 pounds from the 2008 harvest.

For the 2009 season we had over 50 pounds saved for seed. It must be planted at a specific time so it doesn’t cross with the other genetically modified corns in the area and special care is taken with the soils in order to grow it organically (non-certified). We grew almost 2 acres and were able to have a friend harvest the crop with an old two-row corn picker, saving us tremendous amounts of time and effort.

All of the corn is still hand roasted, but now over a much larger roaster purchased from grant. We have experimented with roasting over different woods, such as cherry, apple and maple, and found the flavors to be interestingly different. We sent some seed to two other growers in Iowa for them to trial, as we were feeling the pressure of being the only ones to grow it. And, it has been passed to seed banks and the USDA corn bank. However, we are still cautious with growing it, knowing that one false planting could jeopardize the continuation of this rare variety.

Why save this corn? We think that many heirloom varieties taste better than the other commercially engineered varieties. This corn has a distinctive flavor that is sought after and Slow Food USA recognized that. Another reason for saving this corn is that we believe diversity is a good thing. Plant diversity, saving that diversity with heirlooms, means we can continue to battle the diseases and insects in a safe way.

And lastly, this corn is part of the history of our people and our nation. If we get rid of the past, then who are we? Foods that are heirloom foods help us remember the past, the mistakes made, the good things learned, and how to live a better life now. Bringing the past into the present in order to have a better future is what our farm is all about.